Suleiman was one of Imam Abu al-Walid's three acolytes who accompanied him on a hajj to the Tangiers System on board the Hunter Gratzner when it crashlanded on M6-117. Suleiman was injured by a Bioraptor, which caught on fire when he dropped his makeshift torch. Suleiman was later killed by another Bioraptor who dragged him up a wall with it's tail, before presumably devouring him. 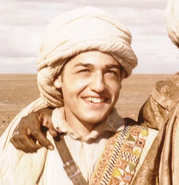 Add a photo to this gallery
Retrieved from "https://riddick.fandom.com/wiki/Suleiman?oldid=18882"
Community content is available under CC-BY-SA unless otherwise noted.