Set 500 years in the future and 25 years after the Necromonger invasion of Furya, the Hunter Gratzner accidentally passes through a comet's tail while on auto-pilot. The ship along with its passengers crashes onto a desert planet. The ship's captain (Tom Mitchell) dies in the initial pass through the comet's tail, and the crash kills the navigator (Greg Owens). Among the survivors are the ship's pilot (Carolyn Fry); a dangerous criminal (Richard B. Riddick); his captor (William J. Johns); a Muslim Imam (Abu al-Walid) and his three acolytes (Hassan, Ali and Suleiman); a young stowaway (Jack); an antique dealer (Paris P. Ogilvie); and two Australian settlers (Zeke and Shazza). Riddick manages to escape in the ensuing chaos of the crash.

With their ship destroyed the passengers decide to explore the surrounding area, and discover that the planet endures perpetual light provided by three suns. While burying the dead crew members, Zeke discovers a cave opening and upon entering it he is brutally killed by unseen, vicious creatures; however, the passengers believe it was Riddick's doing. Riddick is recaptured by Johns shortly thereafter.

Fry meets Riddick, and learns of his ability to see in the dark, what he obtained while in prison. At Riddick's suggestion, Fry explores the cave and discovers the dark-dwelling creatures, barely escaping in the process.

The passengers find an abandoned geological research settlement, with a working ship. Ali explores the coring room of the settlement and accidentally awakens a small swarm of the creatures, and is killed. Fry examines a model of the star system, and discovers that every twenty-two years, the neighboring planets block out the suns, and the planet endures a prolonged eclipse. In light of this revelation, the passengers decide to head back to the crash ship, and bring the power cells back to the settlement.

The eclipse begins sooner than anticipated and the creatures emerge; Shazza dies attempting to flee from a swarm, and Hassan is killed by a pair of them. The passengers decide to continue with the plan, despite the darkness. With Riddick's ability to see in the dark, he takes the lead point. Paris panics and leaves the group, and is quickly devoured by the creatures. Johns suggests that Riddick kill Jack to lure the creatures away from them. After a fight between Riddick and Johns, Johns is killed by one of the creatures.

Suleiman is taken by one of the creatures. Riddick finds an empty cave for them to hide in but continues on his own, and leaves the others to their fate. Fry runs after Riddick and catches him moments before he launches the ship. Riddick, admittedly impressed ("A strong survival instinct... I admire that in a woman"), asks her to leave Imam and Jack, initially she accepts, but she quickly decides against it and orders Riddick to go back with her. After a brief physical struggle during which it is clear that Fry is no match for Riddick, he asks her: "Would you die for them?" She replies, "Yes! Yes, I would die for them." He agrees to return with Fry to collect the Imam and Jack.

Riddick and Fry make their way back to Jack and Imam, and together the four of them make it back to the ship. Riddick falls behind and is surrounded by two creatures. Fry subsequently finds him with a badly injured leg and helps him toward the craft, saying: "I said I would die for them, not you." She carelessly allows a shadow to fall upon her back, and she is snatched by one of the creatures and torn from inside Riddick's arm. As her body is yanked away, Riddick yells, "Not for me."

Riddick makes it back to the ship, and delays launching in order to incinerate the largest possible amount of creatures. Jack asks Riddick what they should tell any bounty hunters or law enforcers they might run into; he answers by saying: "Tell 'em Riddick's dead. He died somewhere on that planet." 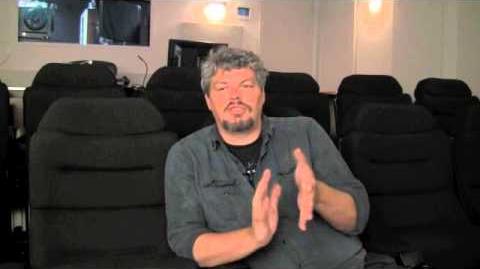 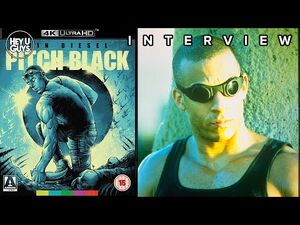 Add a photo to this gallery
Retrieved from "https://riddick.fandom.com/wiki/Pitch_Black?oldid=19675"
Community content is available under CC-BY-SA unless otherwise noted.