Lupus 5 is a planet that appears to be barren and over-industrialized. It is a starting point for most voyages and contains a well-developed space transportation industry.

A mercenary Dresden was killed on Lupus 5 by Riddick, sliced down the spine.[1]

Kyra joined the mercenaries there.[2]

It was the first station of the Rookie Mercenary on his search for Riddick. There he bought a Light Token and detected Riddick's ship flying over Helion Prime. There are large hangars at the space port on Lupus 5. Some mercs like to play dice there for UDs.[3]

Toombs came to Lupus 5 to hire some mercs for his crew. He met Asher in a card game. Asher wanted the bounty on Riddick's head all to himself and wanted to take Toombs out, Evac however got a drop on him first. Toombs hired Evac and they left for Lupus 1.[4] 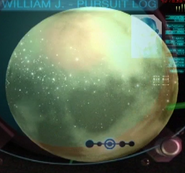 Retrieved from "https://riddick.fandom.com/wiki/Lupus_5?oldid=19513"
Community content is available under CC-BY-SA unless otherwise noted.