John "Zeke" Ezekiel was born on the Outback on Earth from aboriginal descent.

Without formal education, as a child he mined opals in Coober Pedy dreaming to roam among the stars. He eventually worked as a prospector in under-populated worlds with available mineral rights. He had exceptional survival skills.

He was involved with Sharon Montgomery and traveled together on Hunter Gratzner.

After the crash on M6-117, John Ezekiel decided to bury the dead. After returning from one burial he saw a man, who he thought to be the escaped convict Richard B. Riddick and shot him, however the person was just another survivor. John went to bury him too. While digging his grave he smashed through a wall leading to Bioraptor underground tunnels. He then was killed and eaten by the Bioraptors. 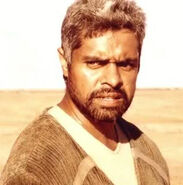 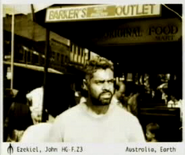 Add a photo to this gallery

Retrieved from "https://riddick.fandom.com/wiki/John_Ezekiel?oldid=18845"
Community content is available under CC-BY-SA unless otherwise noted.