David Neil Twohy (born October 18, 1955 in Los Angeles County, California, USA) is an American filmmaker. As both writer and director, Twohy has contributed much to the world of adventure, science fiction, and fantasy, helping elevate genre films in such a way that Entertainment Weekly named him "one of the 100 most creative people in Hollywood".

As a director, Twohy made his debut in 1992 with the Showtime Original Movie "The Grand Tour", which he adapted for the screen from Henry Kuttner and C.L. Moore's haunting novella "Vintage Season". Starring Jeff Daniels, the film received the Grand Prix at the Festival Du Film Fantastique and a Golden Scroll from the Academy of Science Fiction, Fantasy and Horror. He was honored again in 1996 by the Academy with a Saturn Award for his feature directorial debut, "The Arrival". Also scripted by Twohy, the film starred Charlie Sheen and Lindsay Crouse.

Twohy's next writing/directing venture was one of 2000's most unexpected films, "Pitch Black". Released by Universal, this modestly budgeted movie shot in the Australian outback startled critics and audiences alike with its chilling mood and twists and turns of story. This was also the film that would introduce an actor named Vin Diesel to the world.

In 2002, Dimenson Films released "Below". Directed by Twohy and co-written with Darren Aronofsky ("PI", "Requiem for a Dream") and Lucas Sussman, it starred Bruce Greenwood and Olivia Williams.

In 2004, Twohy wrote and directed the follow-up to "Pitch Black", "The Chronicles of Riddick". His next movie was "A Perfect Getaway", an original thriller released by Universal in August of 2009. It starred Milla Jovovich, Timothy Olyphant, Steve Zahn, Chris Hemsworth, and newcomer Kiele Sanchez.

In 2008 David started writing the scripts for "Riddick", and in November 2011 it began production with David at the helm of Director & Co-Producer. 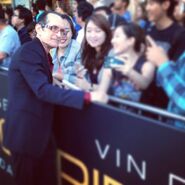 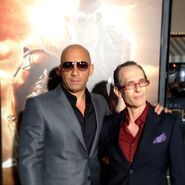 Add a photo to this gallery

Retrieved from "https://riddick.fandom.com/wiki/David_Twohy?oldid=18624"
Community content is available under CC-BY-SA unless otherwise noted.