Dahl is a Nordic bounty hunter of German descent played by Katee Sackhoff. She's second in command of Boss Johns Mercs and is the primary sniper of the group. She is known for having a very short temper and "does not f*** guys"; though her actions in Riddick may suggest an ulterior meaning to "guys."

She is loyal to Boss Johns, having his back at all times. Dahl has a hatred with Santana, often getting in physical fights with him. She also seems to have a interest in Riddick after saving his life and leaving the planet. 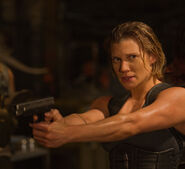 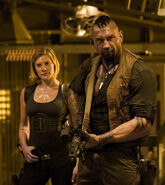