Neighbor and ally of Helion Prime, they are a thriving, altruistic people whose advanced defensive technology is equaled by their space exploration program. They have charted more space than any other culture and their star maps are the universal standard.

After a devastating campaign against the Aquilans, Zhylaw the Lord Marshal orders the destruction of the planet with a massive bombardment known as the "Ascension Protocol", the planet fell victim to the Necromongers.[2]

The harvesting season on Aquila Major begins in the 32nd lunar cycle of the planet. The Aquilan Age of Edification has run from the year 3140 to the present day.[3]

Aquila Major in Hunt for Riddick 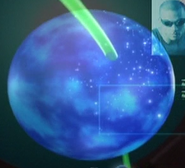