Dark Fury
Hunt for Riddick
The Chronicles of Riddick

Alexander Toombs is the tertiary antagonist in The Chronicles of Riddick. He is a mercenary who wanted to catch Riddick after a short encounter with him on the mercenary ship in Dark Fury.

Nothing is really known about Toombs' backstory. Due to his experiences as a mercenary, his personality is humorous, yet obsessive and cold-hearted.

At some point, Toombs was hired aboard the mercenary vessel Kublai Khan and placed in cryosleep. Eventually, he was unfrozen to help recapture Riddick, only to be ambushed and nearly killed by another creature Antonia Chillingsworth had sent to hunt the fugitive. Despite Riddick's escape, Toombs resolved to continue hunting him.

During this time, he hired a newbie bounty hunter to find him in Hunt for Riddick, a point and click game in which the player is a mercenary searching for Riddick.

Five years after the Kublai Khan, he learned of Riddick's whereabouts and led a four-man crew to capture him on U.V.6, but failed. His ship was stolen, and he was left for dead on the surface of the icy planet. Later, as Riddick ran from the Necromongers on Helion Prime, Toombs' new crew destroyed the ship following Riddick and captured him soon after. It is unknown how he escaped U.V.6, or how he gained a new five-man crew.

He then took Riddick to the Crematoria prison. Unsatisfied with the price the guards wanted to pay for bringing him in, he negotiated with the guards. He gave them one day to change their minds. It ended in a gunfight between the guards and Toombs' men, after the mercs unintentionally led the Necromongers to Crematoria. Riddick seized his chance to escape, and locked Toombs in a cage between two Hellhounds. His fate is unknown after he yelled "RIDDICK" as two Hellhounds try to munch him up. 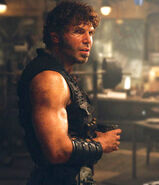 Add a photo to this gallery
Retrieved from "https://riddick.fandom.com/wiki/Alexander_Toombs?oldid=18698"
Community content is available under CC-BY-SA unless otherwise noted.